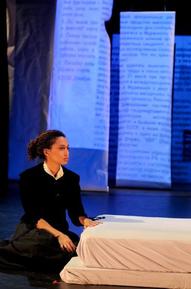 Arlene is an actor, educator and producer; a seeker of Truth and Joy. She believes in the power of stories to transform people and the world, and has dedicated her life to the pursuit of stories being told.

As an actor, Arlene has made appearances in film, television, and the stage. Favorite film credits include What it Was (lead), currently streaming on Amazon. Television credits include Gotham, Law & Order, and the Fox TV show Jonny Zero. Favorite theater performances include Native Gardens at Arizona Theatre Company where she was nominated for a MAC Award- Best Actress, Comedy; Evensong at Astoria Performing Arts Center- nominated Outstanding Actress in a Leading Role for New York Innovative Theatre Awards; Mourning Sun; and After the Crowds, which was named as a New York Times "Critics Pick." Arlene reached a career dream when she performed abroad in Burgos Spain as a lead character in La Noche de Los Asesinos. Arlene co-wrote and performed a short play for Woodlawn Historical Society and also performed her original performance piece Pluck the Sun at iati Theater in the Village and off Broadway at New World Stages.

Arlene has done considerable work on original productions. This involvement ranges from being the first person to breathe words into a character, to collaborating in the development process, to being a co-creator and producer. Her collaborative work includes the award winning Skype Duet- an internet based interactive and international performance piece.  She is also co-founder of Liberation Arts Collective, a multidisciplinary arts organization, and produced the 2018 award winning Where You From? What You Be About? Arlene is also co-producer on Missguidance (in post production), a short film about how restrictive US immigration policies force would be asylum seekers into underground economies.

As an educator, Arlene works with several organizations to teach theater and devised work, improvisation, storytelling, and facilitating improved interpersonal communication skills for medical students. She also works with community centers to bring the experience of seeing live performance to undeserved communities.

Arlene is classically trained and has a BFA from SUNY Purchase, where she won the Directors Award for Acting. She's trained with the NY Neo Futurists, Wynn Handman, HB Studios, and the Pig Iron Theater School for Professional Development.

She has a very exercise-able funny bone and loves drinking tea.